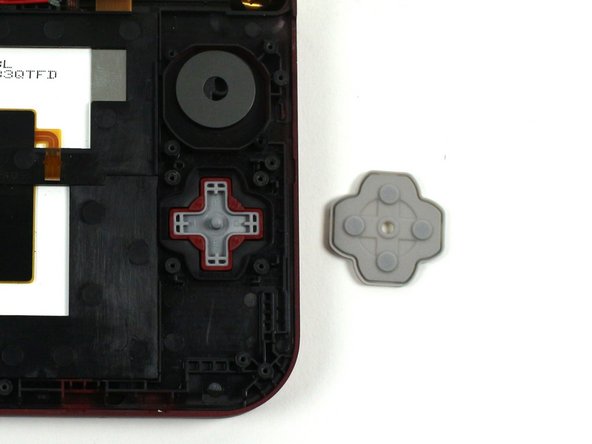 If the Nintendo 3DS XL 2015 directional pad is malfunctioning or not working at all, this replacement guide will help you fix the problem. 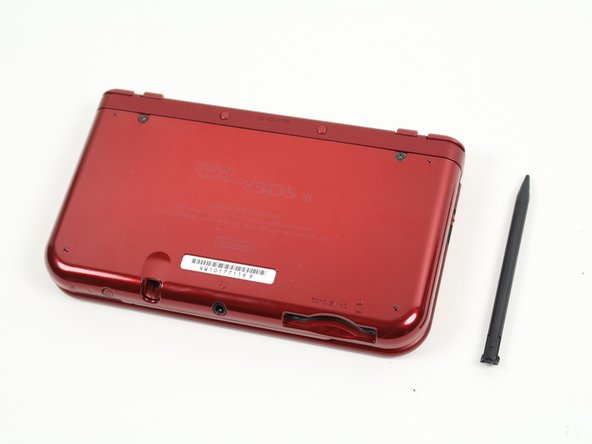 Place the 3DS upside down. Remove the game card, headphones, charging cable, stylus, or anything else that may be connected to the device.

Ensure your device is powered off before proceeding. Failure to do so may result in electrical shock or damage to the device.

Place the 3DS upside down. Remove the game card, headphones, charging cable, stylus, or anything else that may be connected to the device. 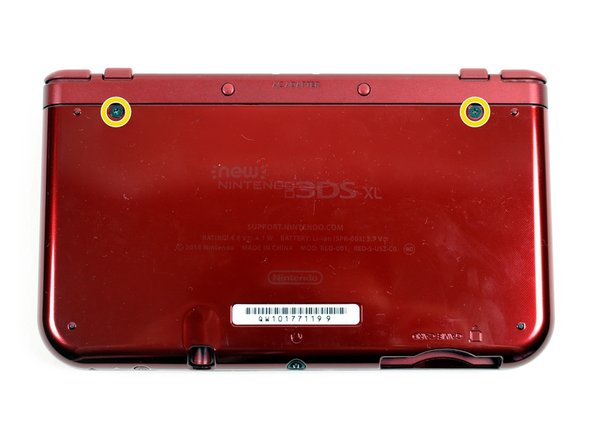 The screws are held in place by captive washers and should not be completely removed.

Using a JIS #0 screwdriver, loosen the two black screws on the back.

The screws are held in place by captive washers and should not be completely removed. 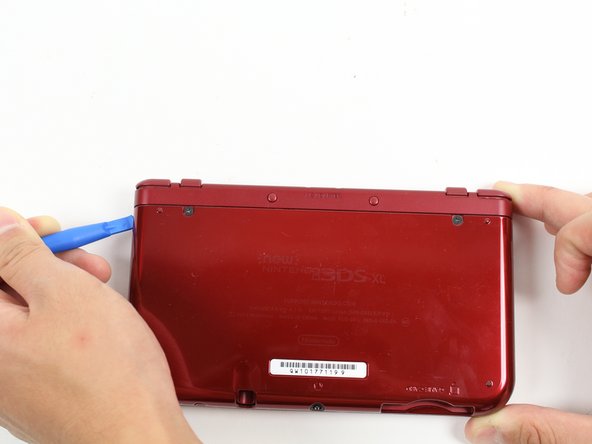 Once the screws are loosened, pry open the back cover. 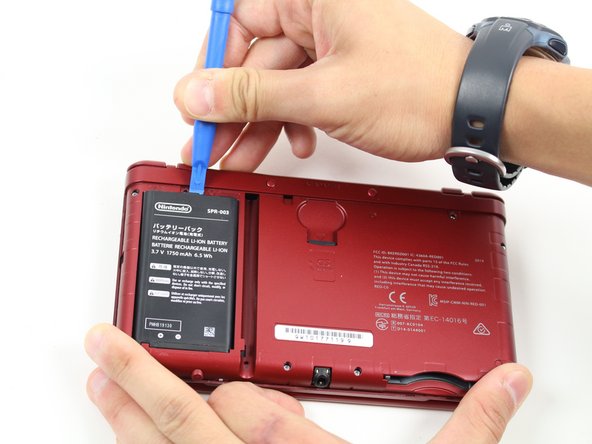 The battery is located on the left hand side of the 3DS - to remove, use the small gap located at the top-middle and pull up with a pointed tool. 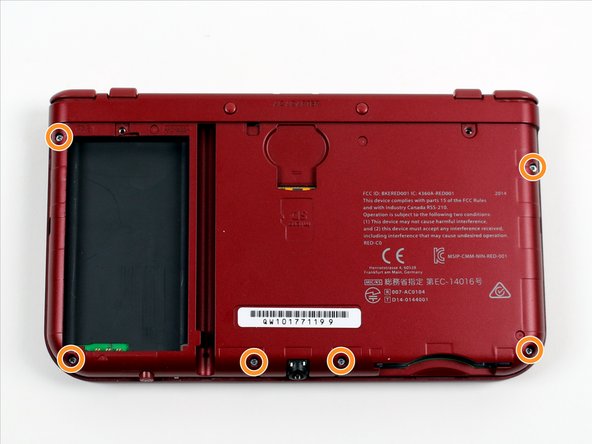 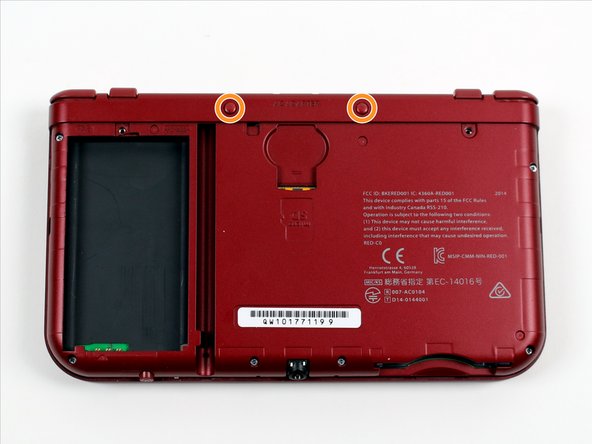 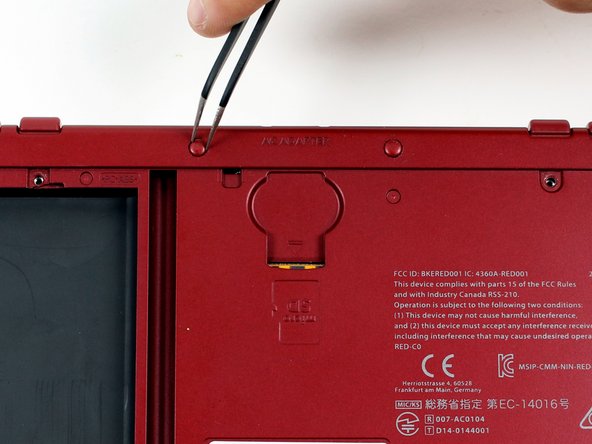 Remove two upper rubber bumpers locates on either side of the charging port. 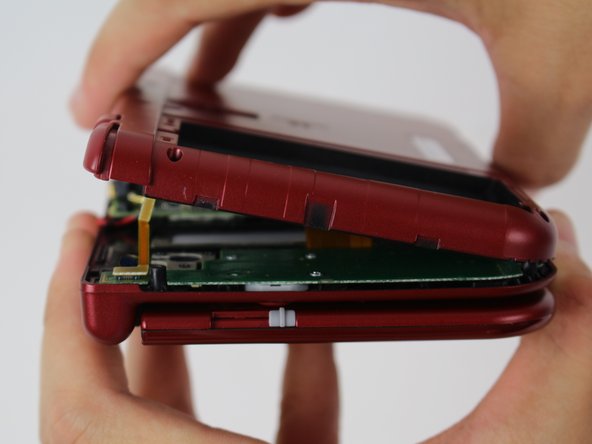 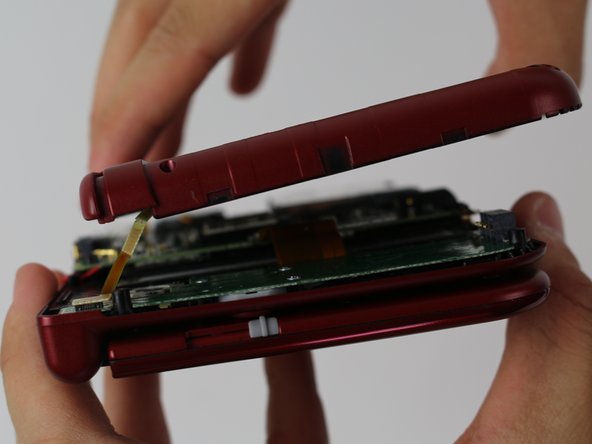 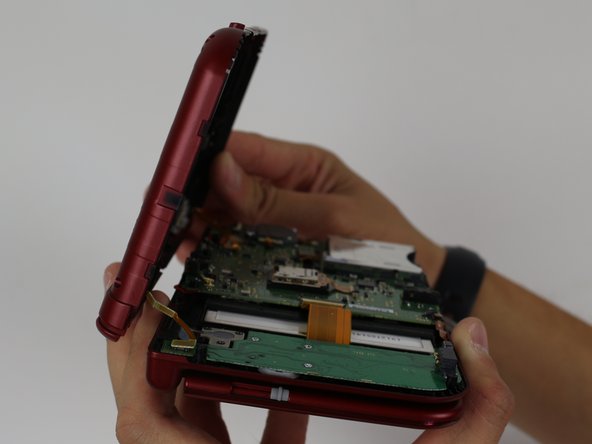 To pry off the cover, carefully lift it up and away from the hinges (in order to clear the headphone port), then pivot it towards the hinges to expose the circuit boards. 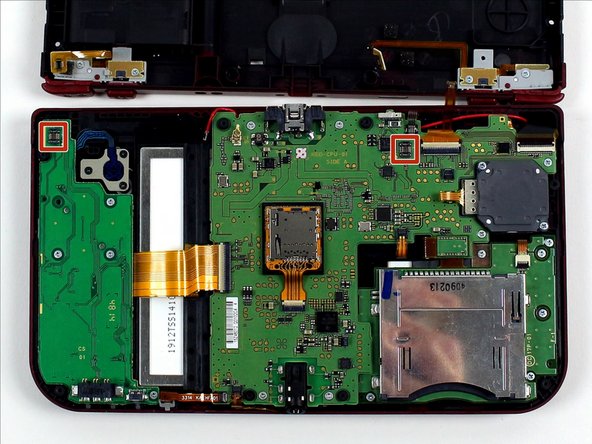 Use non-conductive tweezers to disconnect the two ribbon plugs that connect the L/R/ZL/ZR buttons on the cover to the motherboard, then remove it completely. 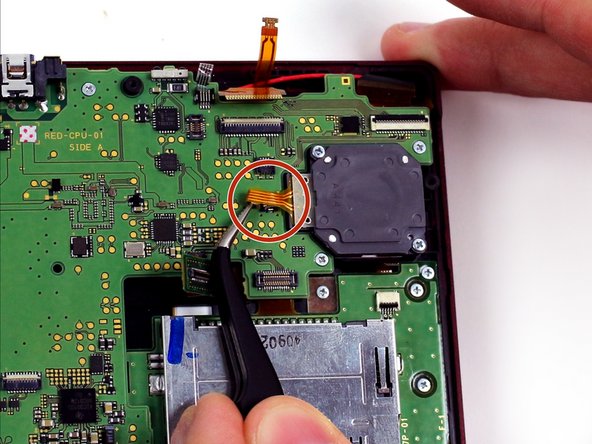 Using tweezers, gently pull the gray clamp underneath the circle pad ribbon connector upwards from the right side. Then slide the ribbon out of the ZIF connector. 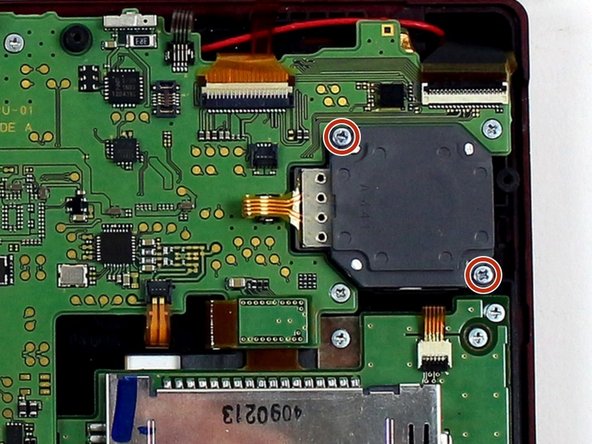 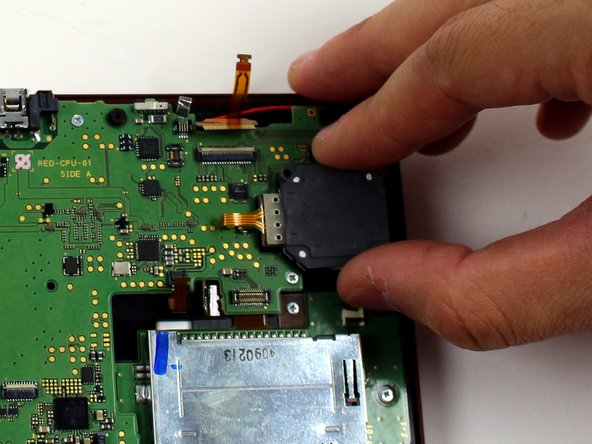 Lift the circle pad casing upward to remove it. There will be some friction, but it should not require excessive force. 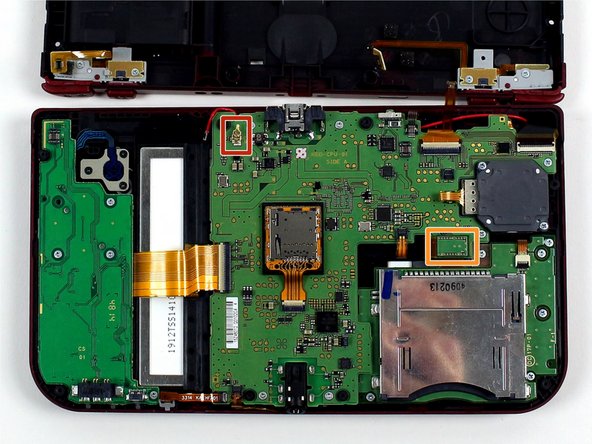 : Use a pair of tweezers to disconnect the single ribbon connector.

Locate the gold terminal plug with a red cable at the top left of the motherboard. Using your fingers, carefully pull the plug straight upward to remove.

Use a pair of tweezers to disconnect the single ribbon connector.

Don't do what we did -- be very careful not to pull on the red cable. 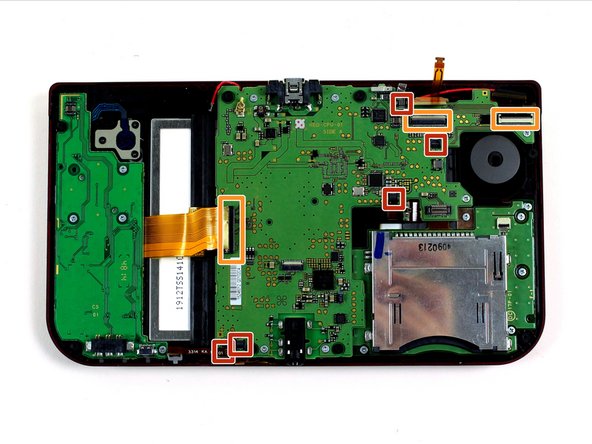 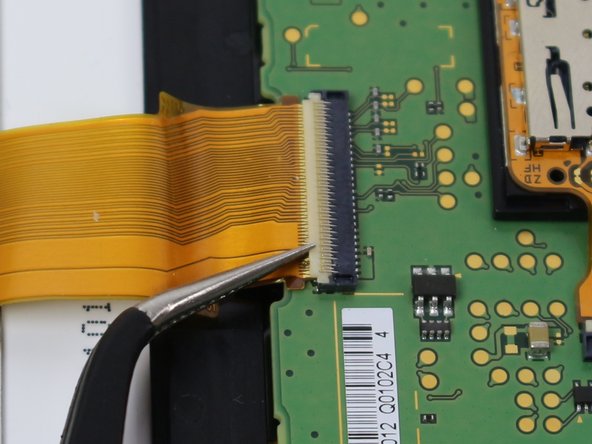 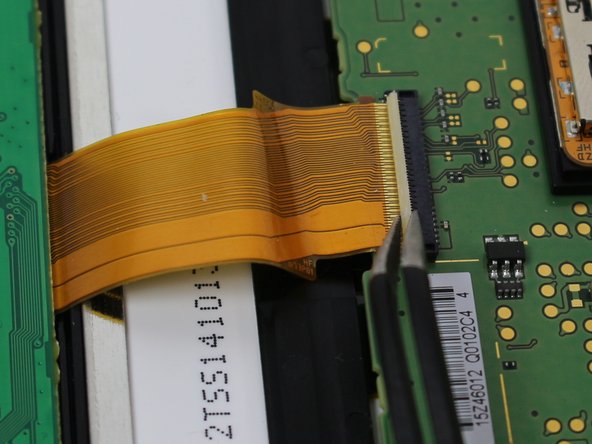 Note that these ZIF connectors are held in place by friction and do '''not''' have locks -- lifting the flaps on these connectors will break them!

Using tweezers, gently pull the five marked ribbons out of the ZIF connectors along the sides of the motherboard.

Note that these ZIF connectors are held in place by friction and do not have locks -- lifting the flaps on these connectors will break them!

Three of the ribbon connectors have plastic clamping flaps that cover the ribbon to prevent slippage. Use the tweezers to flip them up before ribbon removal.

When reassembling the device, be sure to flip the ZIF clamps back down.

While the SD card reader is shown as removed in this photo, it is optional for the removal of the motherboard. 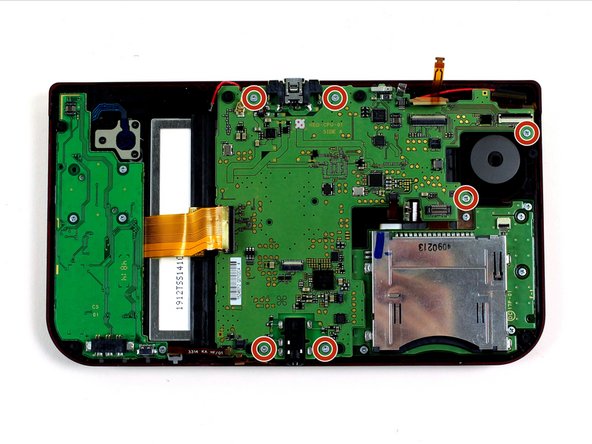 Using a JIS #000 screwdriver, remove six 4mm screws along the edges of the motherboard. 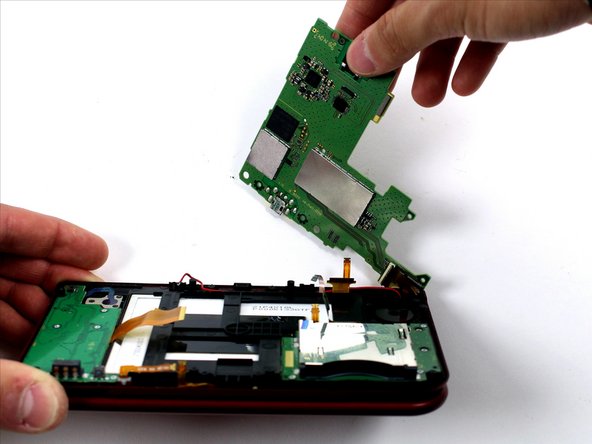 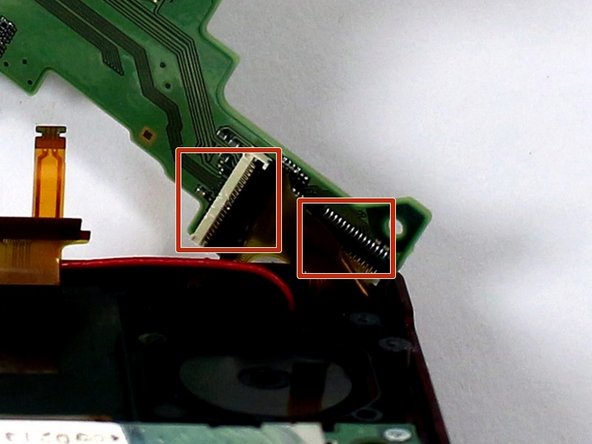 Both have latches that must be flipped up. The left, longer latch is black; the right, shorter one is white. Flip up the flaps, slide the ribbons out and remove the motherboard. 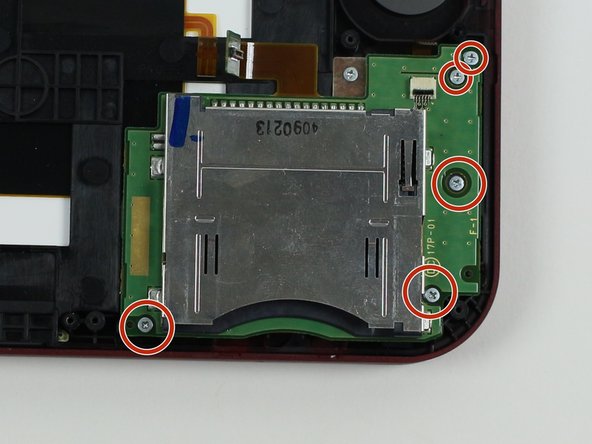 The game card reader can now be removed and replaced. 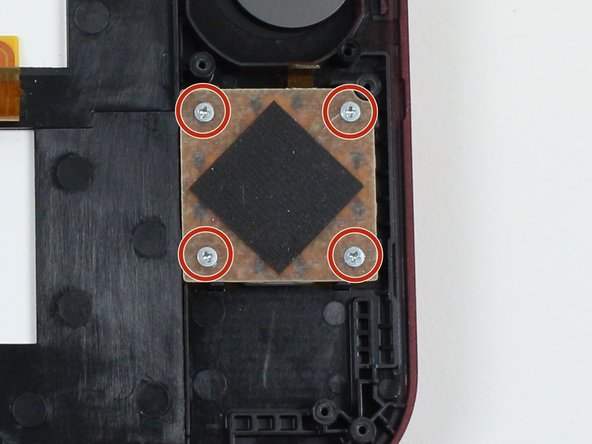 Remove the panel by lifting it upward. 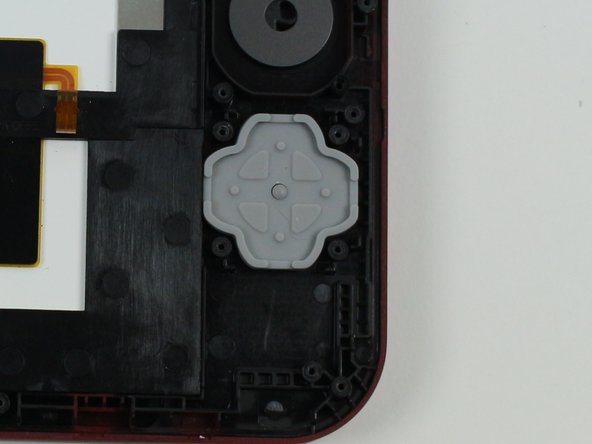 Pry off the gray rubber covering.

Take out the directional pad using tweezers and replace.